How to read the statistics overview?

Statistics overview combines all the most important business data to help you see how your facility is performing. Find out how you can use statistics to make the best decisions for your business.

Open the overview by clicking on Statistics in the main page of Docplanner Phone. The overview is the first tab you will see.

In the top right corner you will see the following options:

The overview consists of 3 sections: Traffic, Callbacks and Performance.

This portion of the overview provides you with the information about how inbound traffic is handled in your facility. It can give you a better idea about the volume of calls as well as patient experience.

This number shows you how many inbound phone tasks were created in a chosen time period.

Next to the number there is a comparison bubble that shows if your inbound traffic went up or down compared to the previous time period (e.g. if you chose in the dates filter to look at the last 30 days, the comparison will be with the 30 days before that). 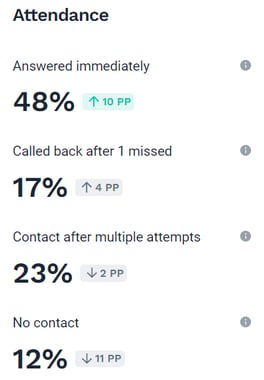 Attendance gives you the information about how well your inbound tasks are attended by receptionists.

The attendance numbers are shown as percentages of the “New inbound tasks - phone” statistic. They are organised to reflect the patient experience from best (top) to worst (bottom):

⭐ The ideal scenario is to have the highest numbers in top categories and lowest in the bottom ones. If you want to make significat changes in the attendance and patient experience, try to improve on the biggest issues first and work your way up.

This is where you can find metrics related to calling back.

The callback conversion section shows you how callbacks are handled and how that may impact clinic's business (estimated).

The last step of the funnel is, of course, the Callback bookings which are displayed above the chart. This number is a portion of the successul callbacks. It's mostly dependent on the patient, as they have to have the intention of booking an appointment.

This section contains 4 performance-related indicators, which can hint towards most common issues with how the reception performs and how that affects the patient experience.